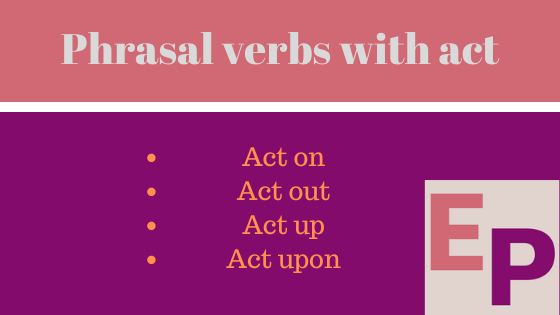 When we study phrasal verbs, the best way is to study them by words they are associated with. In this article, we are going to learn phrasal verbs with act word in them.

Meaning- To act in a situation.

Examples- Tomorrow is your exam. You should act on rather wasting your time.

Remarks- Use of accordingly will be superfluous after act on.

Meaning- Communication through actions rather than words.

Examples-Dumb people act out to convey their talks.

Example-   A group of students acted out on in the ground to show their protest on poor management.

Meaning- To behave in a bad manner.

Examples- Bobby is a good boy but he always acts out by breaking grocery when he is angry.

Meaning-  To perform a fantasy role in real life.

Example- I always wanted to act out as Cinderella in the play. That is why I am very happy today after acting out this role.

Meaning- To act in a bad manner or to misbehave.

Examples- Our dog always acts up after seeing a stranger.

Meaning- To act according to the given information.

Example- Police acted on to maintain the law and order when they received the information about the protest.