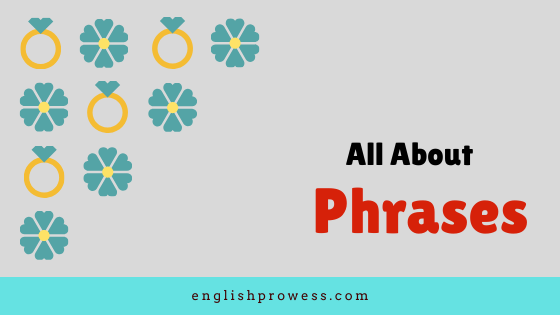 A few examples are apple of one’s eyes, actions speak louder than words, once in a blue moon, regarding a horse, at a time, under the table, above the box, eating food, etc.

According to how a phrase is put in the sentence it can be of different types such as noun phrases, adverb phrases, preposition phrases, etc.

Various types of phrases are as follows:

Let’s discuss these various types of phrases one by one with suitable examples.

One more point to take into consideration is that these phrases are not connected by any conjunction. Generally, these are separated by using a comma.

Remarks- Absolute phrases are also called nominative phrases. A noun phrase or prepositional phrase also can be an absolute phrase. These phrases are commonly used in fiction writing as these add a focusing detail into the sentence.

Infinitive phrases, participle phrases, and Prepositional phrases all these can act as adjective phrases in the sentence.

An adjective phrase can be very helpful in beautifying the literature writings.

A phrase that executes the behavior of an adverb in the sentence is called the adverb phrase. Similar to an adverb, adverb phrases modify a verb, an adjective or any other adverb. Infinitive phrases and prepositional phrases can also act as adverb phrases.

An appositive phrase is a phrase that gives more information about the noun or a noun phrase in a sentence. It consists of an apposite present in the sentence and one modifier. One notable thing is that any type of phrase contains a modifier also in the sentence because of a phrase act as a modifier. These phrases are usually shown by using commas, brackets, and dashes. An appositive phrase can be of two types

Infinitive phrases contain infinitives. Now, infinitives are those which are in the “to + verb” form. To eat, to drive, to dance, to cry, to write, to play, and many more examples are there.

A group of words that behave like a noun is a noun phrase. As a noun, these phrases describe a person, place, thing or idea. In a similar manner to nouns, noun phrases also act as subjects, objects or prepositional objects. We can say that noun phrases exhibit the properties of nouns. This phrase contains nouns and modifiers. Noun phrases can function as absolute, adjectives, infinitives, participles and prepositional phrases. A set of examples is given below:

A participle phrase seems like a verb but it functions as an adjective in a sentence. It modifies the noun present in the sentence. This phrase can take either present or past form of participle. While using the past participle, baked, cooked such types of verbs will be used on the other hand in case of present participle a verb ending with -ing is used. Participle phrases are generally used in newspaper articles and fiction works where people want to get more information in a few words. Let us take some examples:

A prepositional phrase can act as an adjective or adverb. Consider the following examples:

A verb phrase contains a verb and its modifiers. In verb phrases, the main verb and auxiliary verbs are present. Helping verbs are am, is, are, was, were, being, been, has, have, had, etc. When various verbs come together and modify a sentence this is a verb phrase.