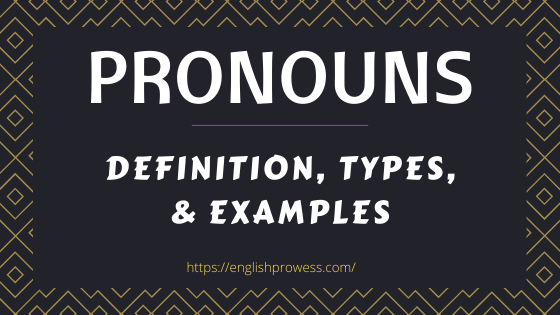 A pronoun is a word or that part of speech that is used in the place of a noun. A pronoun is used to avoid the repetition of a noun in the sentence.

There are 8 types of pronouns that are as follows

These are the types of pronouns we usually use. Let us now learn these types one by one with their definitions and examples.

3 types of persons are used in personal pronoun:

There are two types of personal pronouns.

In a sentence, a personal pronoun can be used either as a subject or an object. Let’s have a detailed look at these.

Below is the table for nominative/ subjective and objective case of personal pronouns.

Let us take some examples for use of Personal Pronouns in a sentence:

Demonstrative pronouns are pronouns that are used to replace nouns in a sentence, pointing towards something in a given sentence.

This, that, these, those are used most frequently

These pronouns can be in two forms, either singular or plural:

None, such these can be used as both singular and plural nouns.

For things near in time/distance: This, these.

For things far away in time/ distance: That, those.

Possessive pronouns are the pronouns used to indicate the belongingness of one thing to another or of one person to another. This type of pronoun shows ownership, for example, my notebook, your pen, his book, her clip, etc.

A list of some possessive pronouns is given below. Let’s have a look:

Note: An apostrophe is never used with possessive pronouns.

Reciprocal pronouns are used to show the mutual relationship or mutual action for two or more people.

There are two reciprocal pronouns that are used.

Each other- This is used when we want to refer to two people.

One another- When we refer more than two people, this pronoun is used.

Interrogative pronouns are used in a sentence to ask a question. These can be used as a subject or as an object in a sentence.

Let us take some examples to understand their usage in a sentence.

In reflexive pronouns, one acts as a subject and an object both. The doer of the action is the recipient of that action also.

Let us go through some examples to get a clear thought on this type of pronoun.

The most common relative pronouns used are:

In this article, we discussed all pronouns. For more such articles keep reading us.